Any time components need to be connected together, the type of connectors that are used become important. More than anything, designers look for connectors that will provide a secure connection, with low signal loss.

With speakers, this problem is amplified over other types of audio and video connections. The signal going to speakers is a relatively high powered analog signal. Compared to electrical house current used for appliances, it isn’t all that high, but compared it is much higher than any other audio or video signal used in most systems.

Any analog signal can become distorted if the wire size or connector contact area is not sufficiently large to carry the signal. This is not based upon the signal’s voltage, but rather the signal’s amperage. At the same time, signal loss, which is a reduction in voltage, increases over small wires. This is why many audio consultants recommend large wire gauge sizes for speakers, especially on systems which are using high power audio amplifiers.

Even with this clear need for high power capacity, speaker connections have been largely ignored, using other types of available connectors, up until recent times. In many cases and for many years, the only electrical connection used for speakers was a simple screw terminal with bare wires. While functional, this type of connection is not highly portable or secure. Often, only part of the wire’s strands are captured under the screw, making for poor electrical and mechanical connection.

Binding post – Binding posts are chassis mounted connectors which allow for the connection of bare wires, spade lugs, banana connectors, or pin connectors. They are a step up from a simple screw terminal, in that they provide better contact and the capability of using these various types of connectors.

Spade lugs – Spade lugs come in a variety of styles, most of which are crimp-on, or solder connectors. The ones shown here are screw-on, rather than crimp. They are designed for use with screw terminals, but will also work with binding posts. The major advantages of spade lugs over bare wires is that they protect the ends of the wires from becoming unraveled and ensure that all the wire strands are captured in the connection.

Banana plugs – Banana plugs are a single circuit connector, commonly used for test equipment in labs. The spring sided design of the plug ensure good contact, even after repeated connections. They commonly connect to binding posts. When used with speakers, they provide a solid electrical contact, which carries ample current.

Pin plug – Pin plugs are a smaller version of the banana plug, coming from much the same origin. They do not have the spring contact that banana plugs do. Rather, they are only used with binding posts which have a hole through their center for the pin plug to go through. For this reason, they have never been very commonly used for speakers, although they have been used. 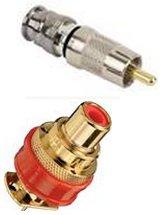 RCA connectors – RCA connectors, also called “phono connectors” (for phonograph) were invented by the RCA corporation in the early 1940s for use in home audio. To a large part, they took over this market from the 1/4” phone connector, due to their lower cost. These are still the most common connector for home audio, due to their low cost and ease of use; however, they must be used with the corresponding jack. The biggest problem with these connectors for professional audio is that they are easily disconnected if the cable is stepped on or kicked.

XLR connectors – XLR connectors have been used for a variety of audio and video applications, including professional speakers. While never a popular use, most mixing consoles did provide a XLR main out. The advantage of XLR connectors for speakers is also the disadvantage, that of commonality. Since they are the same type of connector as used for microphone cables it makes it easy to replace a cable if necessary, but it also makes it easy to confuse cables as well. The current carrying capacity of cables used with XLR connectors, while adequate for low volume applications, was never high enough for professional use in large theatres and outdoor venues. 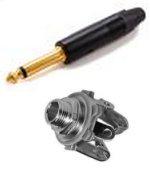 Speakon connectors – The speakOn connector was designed by Neutrix as the first connector designed specifically for professional audio speakers. It is available in either a two, four, or eight pole design. The two pole and four pole designs are physically interchangeable, allowing a two pole plug to be connected into a four pole jack, only using one of the two circuits. The eight pole design is physically larger than the two and four pole.
Speakon connectors have three major advantages over 1/4” Phone connectors:
They are a locking connector. They can carry more current. The contacts are non-shorting when connecting and disconnecting the connector


Today, the most common speaker connectors used are Binding Posts on Amps and Bananas on Speakers for home audio, 3.5mm phono for computer and other small electronics (but these are actually line level or headphone level outputs) , and speakOn for professional audio applications.