About DVI connectors
A DVI connection can be one of three types - DVI-I, DVI-D or DVI-A.
DVI-I:
DVI-I contains both the digital and analog connections, (DVI-D + DVI-A) , it's essentially a combination of DVI-D and DVI-A cables within one cable.

DVI-D:
DVI-D (like DFP or P&D-D (EVC)) is a digital only connection. If both devices being connected support a Digital DVI connection (DVI-I or DVI-D compatible) and are compatible in resolutions, refresh rates and sync, using a DVI-D cable will ensure that you are using a digital connection rather than an analog connection, without playing around with settings to assure this.

DVI-A:
DVI-A is really rare. Why use a DVI connector when you can use a cheaper VGA connector? see DVI-I P&D-A (EVC) is more common with projectors, and you should go to your projector manufacturer for recommendations.

Dual Link:
Dual T.D.M.S. (transition minimized differential signaling) "links". DVI can have up to two TMDS links. Each link has three data channels for RGB information with a maximum bandwidth of 165 MHz, which is equal to 165 million pixels per second. Dual-link connections provide bandwidth for resolutions up to 2048 x 1536p.

Single Link:
Single T.D.M.S. link. Each link has three data channels for RGB information with a maximum bandwidth of 165 MHz, which is equal to 165 million pixels per second.
Bandwidth for a single-link connection supports resolutions of over 1920 x 1080 at 60 Hz (HDTV).

DVI-D Connector
You must use a DVI-D cable.

DVI-A and VGA (Analog only)

DVI-A
Notice the three rows of eight pins have three pins missing in the first row, five missing in the second row and four missing in the third row, and that the "flat blade" contact seen to the left has two contacts above and below it. There is no single or Dual link in analog cables. 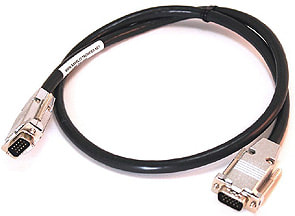 P&D (EVC)
(notice the the three rows of ten pins, rather than eight. The connector is 1 1/4" wide at its widest point.) The analog version and digital version of the connector have different shapes.

P&D can connect to DVI-D, DVI-I, DVI-A, DFP and VGA, depending on which version you have.

The contacts are completely different in a DFP cable, they are on a center "tongue" like a "Centronics" printer cable.The "D" shape of the connector is more pronounced. The connector is 11/16" at its widest point.

DFP will connect to DVI-I, DVI-D or P&D

About DVI: DVI is the new interface for Digital flat panel LCD monitors and video cards. There are a number of versions of DVI, including DVI-I (analog & Digital together) , DVI-D (only the Digital signal) and DVI-A (only the Analog signal) . Why was DVI created? Wasn't DFP enough? Well here's the history. The P&D or Plug and Display standard, which was ratified by the Video Electronics Standards Association in 1997, tried throwing everything into one connector including Digital and analog interfaces, USB and FireWire, all on one connector. This was very expensive and considered more than was necessary especially for monitor and video card manufacturers. DFP on the other hand eliminated all this excess and has only a Digital interface for Flat panal displays. The reason DFP isn't still being used is its maximum supported resolution is "SXGA", or 1280 x 1024 pixels. This will not be enough for a future filled with HDTV, which has a resolution of 1920 x 1080 pixels.

Important: In DVI like anything else, Analog only talks to analog, and digital only talks to digital. Don't try using a DFP or DVI-D (Digital only) monitor through an adapter to a VGA (analog) viddeo card, it will not work! While converters are possible, nobody has any on the market. The problems with making a cost effective "Generic" analog/digital converter which would support a very wide range of monitors and video cards is apparantly too great.

​Adapters:
DVI to VGA adapters (really DVI-A to VGA adapters) will connect a regular VGA/SVGA monitor to a DVI-I connection.
A DVI-I connection from a video card or monitor will connect to a digital signal (DVI-D) and an analog signal (VGA) as well. Connecting DVI-D or DFP or D&P-D connections to a VGA monitor requires a digital to analog converting adapter, which currently cost around $400.00, usually making a video card replacement a better choice.

What are the best audio and Video Connections?

First of all - Why use DVI? This allows a Digital connection from the STB to the TV/Projector eliminating any unecessary analog to digital conversions and keeping the signal digital as long as possible or keeping it digital all the way. Almost all Set Top Boxes use DVI-D and do not carry any analog signal. A DVI-D cable is all you will usually require, not DVI-I. HDTV capable Rear Projection HDTV's (RPTV's) have a maximum resolution of 1920x1080i @60Hz and should only require a single link cable, as do almost all DVI equipped displays. Plasma screens and Flat panels can have higher (or lower) resolutions and refresh rates and could use a Dual link cable, however, a Set Top Box is not likely to support Dual Link connections anyway, so a Dual link cable could still be a waste. We are certainly trying to keep track of what the STB (Set Top Box) manufacturers are doing. Of the Boxes either out, or coming are the Samsung TS160, T165, Zenith SAT520, Sony SAT-HD200, Toshiba DST-3100 and RCA DTC-200.

Some new DVD players with DVI output are now available such as the Vinc Bravo D1 and Samsung HD-931. These DVD players as a bonus, also have scalers to output 720p and 1080i resolutions making them a perfect match for HDTV displays. These players, like HD Set top Boxes with DVI also demand a high performance DVI cable. Any cable longer than 6-9 feet will need a higher quality of cable in order to minimize artifacts or even work at all.

note: Trying to connect a Set Top Box with DVI output to a Display with VGA or Component (analog) inputs is difficult due to HDCP. Many STB's do not set HDCP encryption "on" for content at this time, meaning you can use a DVI-D to VGA Converter for connection to HDTV's or Projectors with VGA (RGBHV) connections, or a combination of DVI to VGA converter and a VGA to Component video Transcoder to connect a HDTV or Projector with Component video inputs, and actually get a full resolution signal on your TV or Projector. If DirecTV or whoever supplies content to your STB, decides to turn on the "flag" for HDCP to be turned on for a channel or show, then no output will be delivered from DVI output of the STB to the DVI input of the converter, since the converter is not HDCP capable.

Some of the new DVD players coming out have DVI-HDCP connectors. Some are even capable of outputting 720p and 1080i, but these will HDCP encrypt all DVI output, and will only work with HDTV's and Projectors with DVI-HDCP.

Connecting a PC to a HDTV through DVI:
Graphic Cards (as well as computers with built-in graphics like Mac Mini's) have DVI-I connectors that are able to support either DVI-D or VGA monitor through one connector.

DVI - VGA:
If the Display has a VGA connection, and the PC a DVI connection, you should use a DVI-A to VGA Cable , adapter or splitter. The resulting connection will be analog, and basically the same as a standard VGA connection.

DVI - DVI:
Connecting an HDTV with a DVI input to a PC with a DVI output is not always as easy as you may think. If your HDTV or projector supports 720p, you should set the video card output for 1280x720@60Hz and see what you get. Some of the newer drivers even have an "overscan" setting to help alleviate some of the overscan of a typical TV. HDTV manufacturers don't exactly encourage this generally and don't always publish enough information to determine before buying (or after buying for that matter) what video resolutions and what horizontal and vertical frequency specifications they require. This is a shame since video card manufacturers are very good about this. There's not a lot of support from the manufacturing community at this point and plenty of HDCP and sync issues to muck things up even more. Most sites dealing with these problems are Internet newsgroups and Home theater online forums. We will be adding some "Howto" pages about this as soon as possible.

Often the safest choice for a DVI Cable for a new DVI video card connecting to a DVI Monitor is a DVI-D to DVI-D "Single Link" cable. If the card and monitor are closer to "state of the art" a "Dual Link" cable may be needed. In most cases both will work. If a connection is DVI-D, and properly designed, you will not be able to plug in a DVI-I cable but should use a DVI-D cable, even if one of the devices you are connecting is DVI-I. If your monitor is older and you want to ensure that you are using the digital connection, a DVI-D cable would usually be a better choice. Those with monitors with DFP connectors would need a DVI-D to DFP cable. You cannot directly connect DVI-D or DFP to VGA, since you need an analog to digital conversion. We have these converters available. For DVI-I to VGA connector monitors, use a DVI-A to VGA cable. Questions? email: support and give us your monitor model and your video card and we will try to determine your needs.

​Connecting a PC to a Projector through DVI is similar to connecting a HDTV. Cables, adapters, or splitters are the same and can be used on both the computer or the projector for analog and digital signals. Some projectors have a M1 or P&D connector, which is similar to the DVI, see above. M1 adapter will convert DVI or HDMI cables at the projector.


HDMI:
http://www.hdmi.org
Why it is sometimes best to use a DVI-D cable even with DVI-I equipment. If the four "holes" (contact sockets) around the crossed blades that look like a "+" on the right side of the picture on the left are missing like in the picture on the right, this would mean the card is definitely DVI-D, or "digital only". Those pins around the "+" contain the analog portion of the signal which you would need to connect a VGA (analog) type monitor. On the other hand, the presence of these "holes" does not guarantee that the card supports DVI-A (analog monitors) either. Your card could still be digital only. The manufacturer of the card could have used this connector so that a person trying to plug in a DVI-I or DVI-A cable would not break the pins on their cable.

Note: Manufacturers of video cards and Displays could put (for example) DVI-D female connectors on cards and monitors that only support digital communications so that DVI-A or DVI-I connectors can not be plugged in. This would eliminate any confusion over what signals were supported by a video card or monitor. However, this is very rarely the case. Generally they use a DVI-I connector so that any DVI style cable can be plugged in, whether or not the card/monitor can support both analog and digital. In one important way this is also a good thing for them to do. Cable connectors that contain pins not present on a DVI cards connector can easily be damaged when "forced" into the connector.

Manufacturers of DVI cards should and usually do use a separate connector for the analog signal if this is supported by the card. This keeps both analog and digital signals from being run at the same time in the same cable, and eliminates some connector confusion.

Remember: Analog only talks to analog, and digital only talks to digital. Don't try using a DFP (Digital only) monitor through an adapter to a VGA (analog) video card, it will not work!