How to connect your Computer to your VCR or Camcorder

HOW TO CONNECT YOUR COMPUTER (PC/MAC) TO YOUR VCR

In this scenario, there are two different signals to be considered. There is the video signal and the audio signal. The video signal is a bit tricky if you don't have a video card with a video output that isn't digital, which is getting rather rare these days. Many new computers have HDMI or Displayport outputs, which are great but require expensive professional cards to capture the video, and copy protection issues can be a major problem.

Digital: Your best bet for something affordable is a BlackMagic Design "Intensity" card or external USB 3.0 converter. Google it. The line accepts HDMI, so if you have Displayport or mini DisplayPort, then you'll need a converter.
Analog:   To get video output you will need to use a VGA to video converter box. These are available with a number of different features, such as PAL compatibility, S-Video output or Component Video output. Converting to one of these outputs will convert the video to a Standard Definition signal that the VCR can accept and record.

You can possibly get better video quality with "S-Video" or "Component Video" rather than the usual included "composite" video cable, since S-Video (often called Y/C video or S-VHS) separates the video into separate color and brightness signals for increased video fidelity, and Component Video separates the signal into three parts. The caveat here is that recorders with S-Video or Component Video inputs are exceedingly rare.

AUDIO:
The audio signal will be taken from your audio "line out" connector on the back of your computer, or if there is none, then the "speaker" output will usually work fine. Most of these audio outputs use a connector called a "3.5mm stereo mini phone plug" (or 1/8" mini phone plug) which is "standard" although some more professionally oriented sound cards have "RCA" jacks. If you don't know what yours has, it is almost definitely a mini phone plug. So, to connect the computers output to the VCR input, you use a 3.5mm mini plug to RCA cable or an adapter together with a RCA jack stereo cable which goes to the audio input of your VCR.

Here are examples of the parts you need:
1) 3.5mm to RCA Cable


VIDEO
The idea here is to to connect your VCR or older Camcorder with analog output to your computer in order to "record" your video to your computers hard drive for later watching, or editing or to make Video CD's, DVD's or perhaps to put on the web.
What you need will depend on the "size" and quality of the finalized video you are going to need, and what the videos will be used for. If you just want to "capture" a small (example:352x288 pixels) sized video (a small screen on your desktop like you would see on Internet video clips) then a Video to USB adapter will be fine. This will not be good for editing and recording back to your VCR or Camcorder, for doing this you need to capture "full screen video". If you want to capture "full screen" (usually considered 640x480 pixels which is basically the same as American "NTSC" standard Television) then you will need something that can handle quite a bit more "bandwidth" (larger quantity of data per second) than USB can handle. USB 2.0 Capture devices or Firewire Capture devices can generally do a pretty fair job, with firewire generally being better. USB 3.0 or Firewire 800 can handle HD signals, so a VCR's output will be a piece of cake for those transfer connections. PCI slot Capture cards are another great option if you can still find one for Composite video. 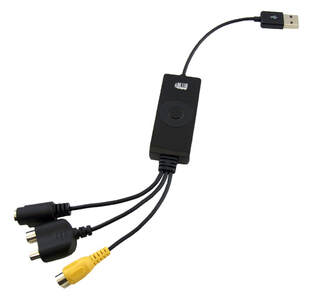 
You can connect the VCR's audio outputs directly to the Capture devices inputs. If the video capture device has no audio inputs, then use the "mic/line" input of the computer.  You use a 3.5mm mini stereo phone plug to RCA jack adapter with a RCA jack stereo cable which goes to the audio output of your VCR or other audio source.

If you are using a Pro or Semi-Pro Analog Audio/Video Capture card that captures both audio and video and uses different connectors, then it would depend on your specific model which audio or video adapter, if any, you would need. Basically, if the signals are the same, you just need to match up the connectors. A VCR will always use stereo (two) RCA jacks for audio and a single RCA (yellow color coded) jack for composite video. Some Pro or Semi-Pro Models use S-Video jacks or BNC jacks for composite video.